jo jo, prit se ...
Is this an account for a measuring?
"Tirana Patience", differently from other figurative' arts expositions, claims as its innovative achievement the temporary withdrawal not exposing the works that for years have been shown, changing so the configuration of the hole last decade.
It is a curious idea to withdraw instead of showing, although inclusion of originality in the presentation of an exposition rationale can cause adversities to the viewer keen on distributing judgments. Earlier I had heard about composers of piano pieces that didn't had a single note apart from the pianist that told about parts of it ending a starting, but now we have an implementation of the idea in the figurative arts.
The curators Adam Szymczyk and Nataša Ilić haven't gone so far. They have left some of the works to be seen.
They belong to the socialist-realism works' inventory that the Albanian National Gallery owns and keeps as a permanent exposition in its' first floor. But now they are covered. Living their presence as light brown surfaces with a few hardly distinguishable traits beneath.
The random visitor after being entertained with the idea of the hidden has no choice but engage with the shown. A few paintings are left open and to their aid a number of contexts has been created through videos, clips, other paintings or installations. 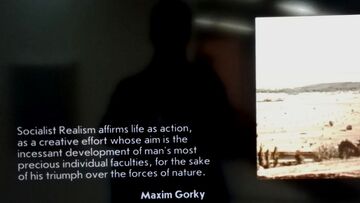 Tirana Patience. Tirana patience for the political that has been lived socially and individually? Tirana Patience for what determined the aesthetics and ethics of painting in Albania during the time of the dictatorship, when this work was created? Tirana patience for the dictatorship itself? Something else? Its very probable?
A hole lot of them are present through the contexts.
In five screens distributed in the five different spaces of the gallery are presented some of these contexts.
In the first one left, Russian scenery is doubled within the screen and presents quotes that best present the aims of the socialist realism. Its' romantics raiding horses in the immense fields where the grain welcomes the wind with happy dances. And Gorki is quoted .
A video of youth in love and cares is a parody, a continuity, a denunciation, a continuity. They buy shovels and visit the arena together with other visitors that seem to have different motivations for being there.
There is also another video, on its own, about work in eastern Europe; and another one of Anri Sala on the personal narratives of the why-s somebody could become part of a repressive regime; and another one on the life routines, delicacies and peculiarities of  different lives as a universe stuffed within a room where people, pictures, window views are also residing, somewhere in Odessa.

But the paintings from the Gallery's collection are the first to provide meaning for the exposition. Everything else is just a context for them. In the presentation of the exposition they underline that a closer connections with some of the works on show is also an objective of it. And closer connections are always a possibility for new emotions and insights, and maybe also some fund. New details, and possibilities to furnish the talkative ones-self with spaces for social and personal legitimate curiosity arises.
But in these cases there is a big risk of ending up in useless gossips. and you find yourself asking why has the painter Petro Kokushta placed an eczema in the face of the electrician at the painting "In the heights of light"? To make it more realist? Is he anxious to spot weaknesses at the new socialist man? Did he go frequently at the mountain peaks to see the electricians working? really where electricians like some gym devotees of 2020's Tirana? What was that comment of the american scholar on the homosexuality of these iconography angels ?1 Of course a nice painting, although realism maybe is suffering but at least a measure for the distance of socialist realism from realism? The patience required? 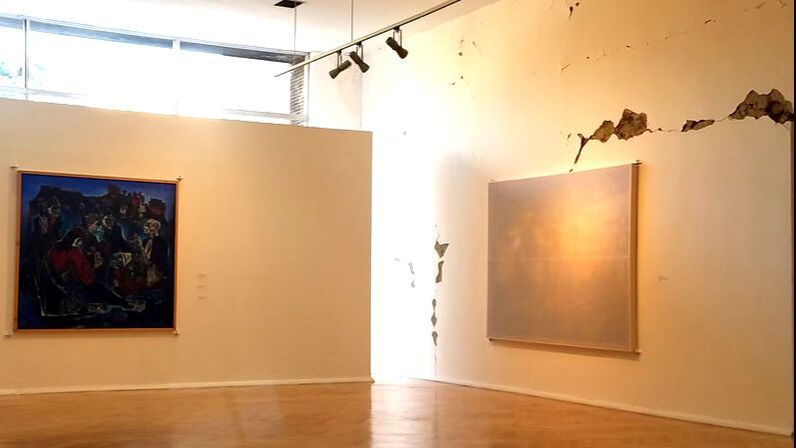 Another painting that in continuity awakens the attention of the curators is "The epics of the morning stars". It is to be commented on the discussions that will accompany the exposition and for the interesting fate and possibilities for interpretation is also special to me 2.

But these works have always been there, and so has been the possibility to talk about them, but the new contexts persist. In a few cases the new contexts are created by new works of art, as is the case with these five landscapes from Genti Shkurti.

The frames that hold these paintings  predict the future. they have the shape of the buildings that in the near future will replace that view. the play with the perspective tells about their closeness. The paintings end in or start with a painting of the permanent exposition. The painting from Aristotel Papës tells about the construction of the new apartment buildings in the 70s and 80s. And now the progress of the time is no longer a progress but a urban plague that causes aesthetic and other concerns.

But something was to be suspected even in the times when construction was majoritatively considered a progress. The new buildings impose themselves. They swallow the people. Although of only five stores the people are Lilliputs at their feet. On the contrary of what is professed at the socialist realism manifests where the scenery is just the background of the heroes, they are the real protagonists.The humans are almost missing. But they are there. Here they are: 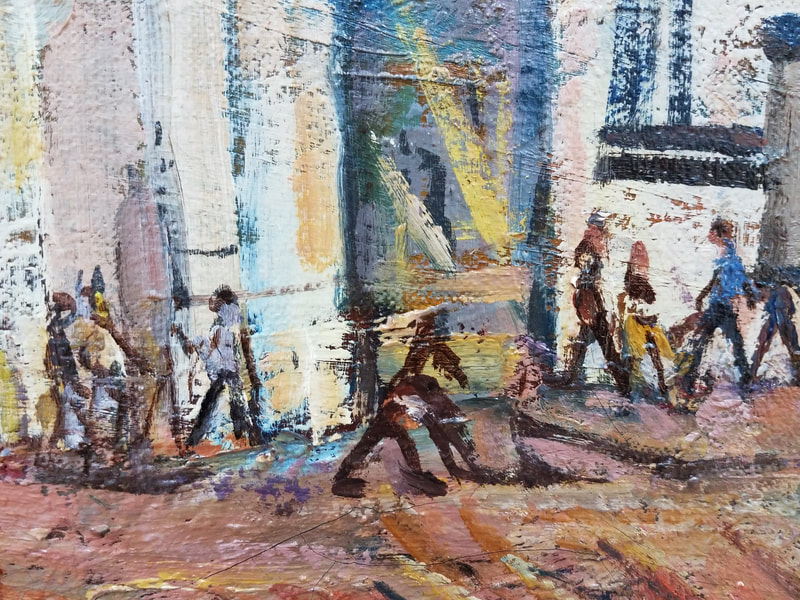 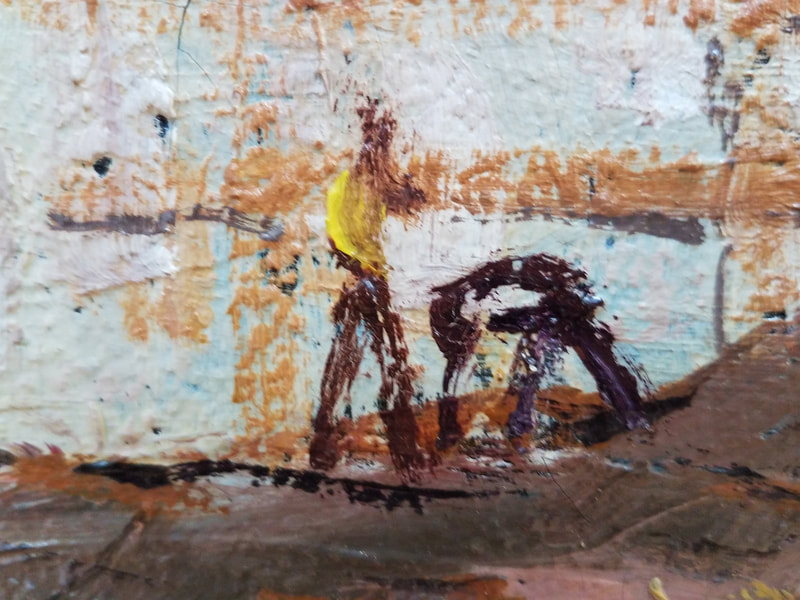 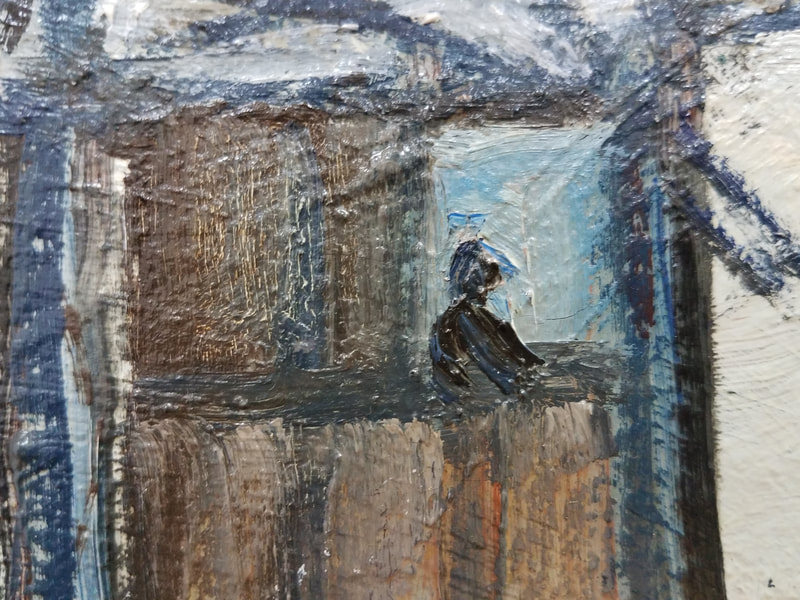 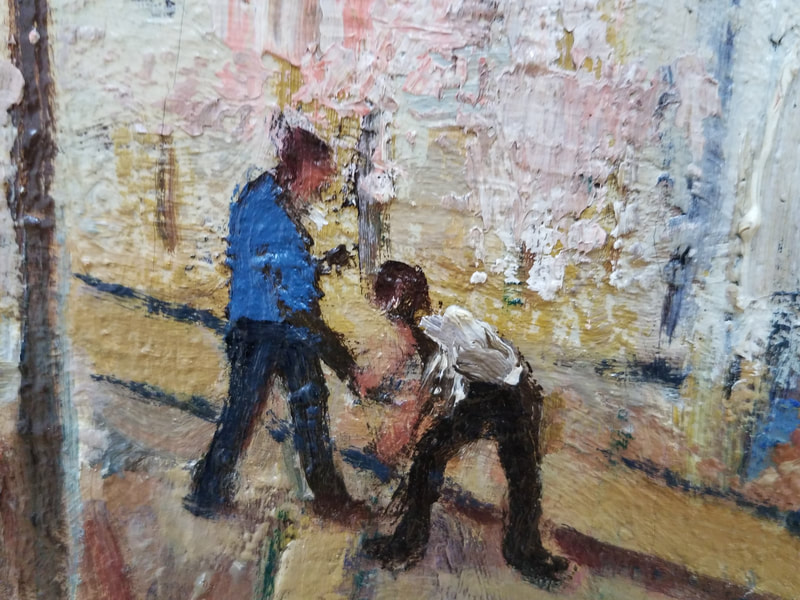 They are workers. And work as the tester of the patience is repetitively coming back. The ideological ax of the exposition is a stand toward the work.
A little further the Kosovo artist Doruntina Kastrati presents the installation "Public heroes and their secrets". A work about class exploitation in Kosovo during our own times. 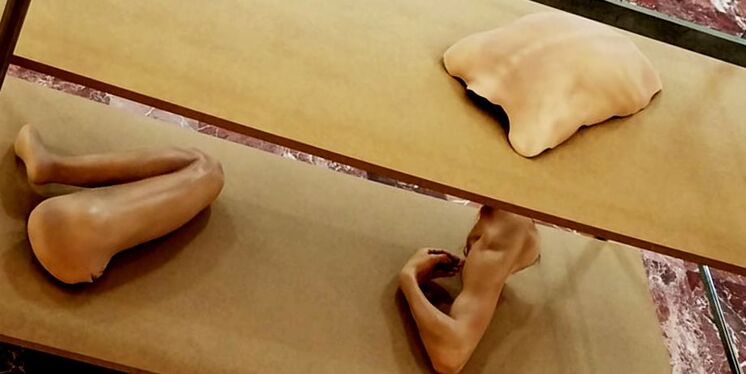 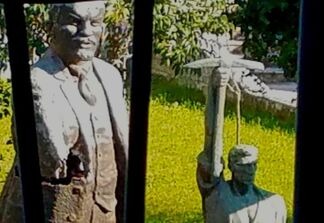 But with all the new and the old, the exposition seems to maintain the attention at itself, and not the works. Nay even itself, but at an interpretation. A figurative arts exposition that dreams to be a pamphlet? It creates possibilities for increased attention to details, reflections, but the figurative seems to be losing ground. Thought is preceding senses, and we can not rush fill with determination as this worker rushed in the direction that Lenin was not pointing with his missing forearm as in the few of the back garden of the gallery our of the window.
Anyhow, it is interesting that ethic-aesthetic narratives are made possible through visiting curators. Following the presentation on the leaflet of the exposition you would imagine that the success of the exposition would be flow of people towards it, but hat doesn't seem to be the case. The building of the National Museum of Arts turned in a "Palace of dreams" through the work of Ibrahim Mahamas, who has covered all of it with dark straps, maintained its usual quietness within the breached walls. The people reconsidering their patience remained entrapped in the painting of Lumturi Blloshmi.
As we mentioned it, the walls of the museum breached from the earthquake, were spared any care and memories of the fearful event where there. A development will develop itself? 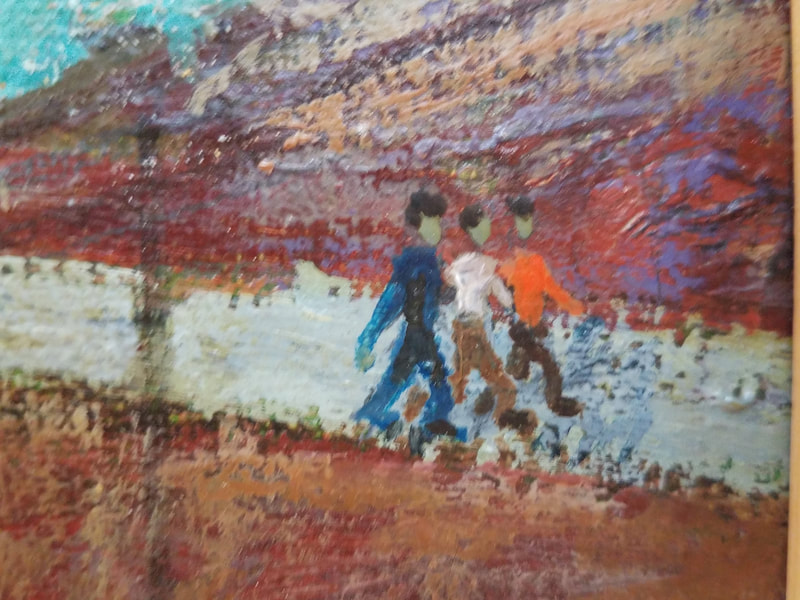 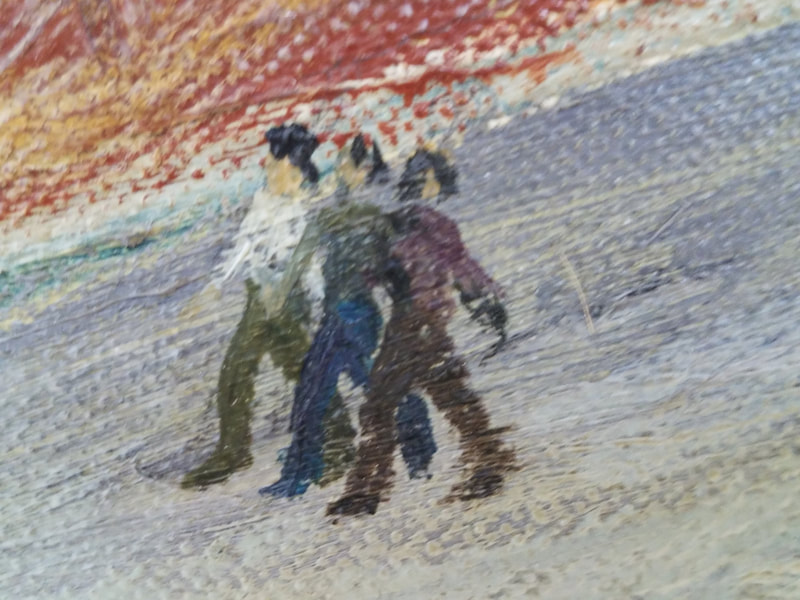 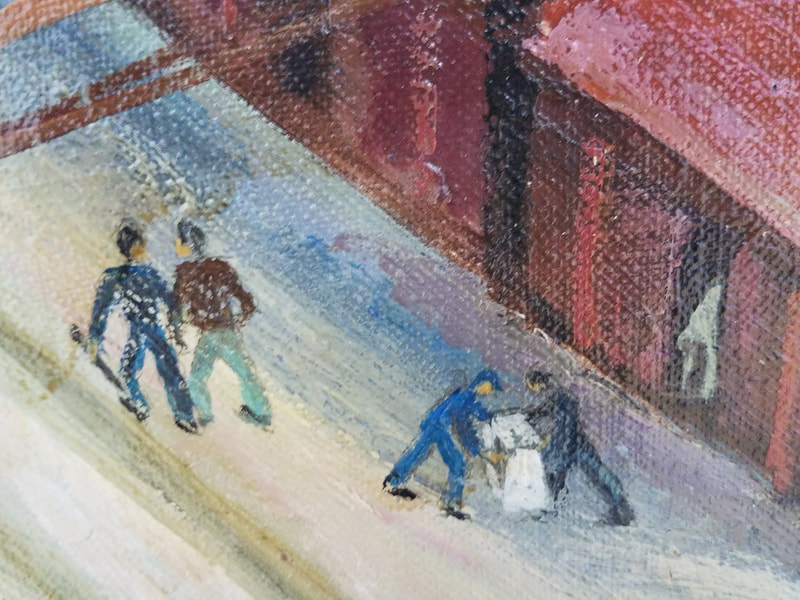